Home > News > Precautions For The Connector Of The Bridge During Installation

Precautions For The Connector Of The Bridge During Installation

Here is Fiberglass Cable Tray Manufacturer talking about Precautions For The Connector Of The Bridge During Installation.

If you have any idea about Fiberglass Composite Cable Tray, welcome to contact us and discuss.

When the bridge is installed, there are joints between the straight-line stages and the straight-through deformation and straight-through. The connecting parts of the bridge manufacturer should be used. The thickness of the connecting piece steel sheet shall not be less than the thickness of the bridge steel sheet. The interface should be flat, without distortion, protrusions, and depressions. The half-head galvanized bolts for connection should be placed on the inner side of the bridge. The length of the bolts should be appropriate. After tightening, the exposed length should be 2~5 teeth. For horizontally installed bridges, the joints of the straight sections should be placed as close as possible to about 1/4 of the two hangers. 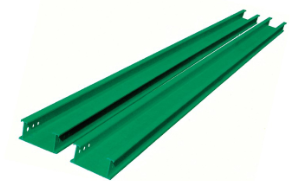 1. Under normal circumstances, the bridge is not made at the construction site. For special reasons, the existing bridge can be used to modify non-standard bend and reduce straight. When rebuilding and cutting straight-line bridges, they shall not be cut by gas or electric welding, and special cutting tools shall be applied. The modified bridge must be flat and replenished in time. The color of the topcoat should be similar to that of other bridges. Because in new buildings, the installation of the bridges is generally carried out several months or even a year after the completion of the concrete structure, and the concrete shrinkage is gradually reduced. The amount of expansion and contraction generally does not exceed the width L of the building expansion joint.

Previous: Key Points Of The Cable Tray During Maintenance

Next: The Function Of The Glass Steel Purification Tower