FRP Chimney should pay attention to the following points in material design: 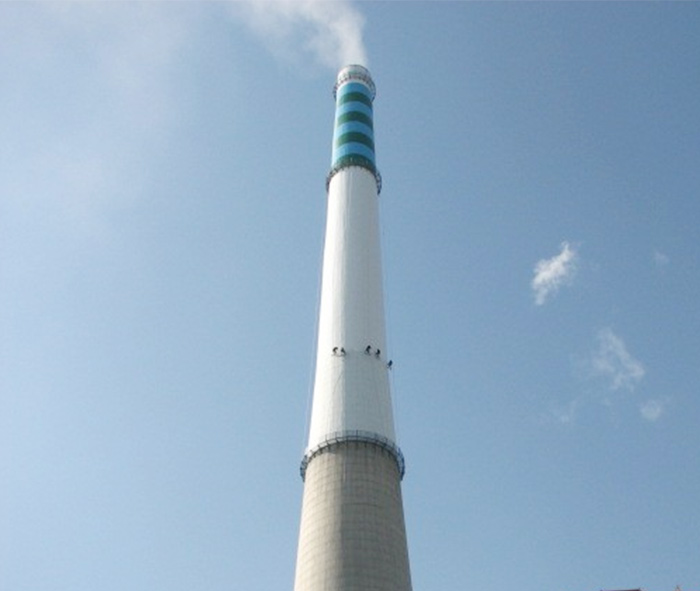 The choice of lining resin is mainly based on the corrosiveness, temperature and water content of the flue gas. The vinyl ester resin is commonly used in the market, such as D470, D411 of Ashland, SW907 and SW901 of Shangwei. Huachang's W2-1, MFE-2 and other resins. But not the higher the price, the better the resin performance, the different types of resin have different corrosion resistance characteristics. For example, HET acid resin is more suitable for the application of chlorine chemical medium delay, such as hydrochloric acid vapor; in addition, the mechanical properties must be considered when selecting the resin, especially the mechanical properties at high temperature should be fully considered, because FRP is at high temperature. The mechanical properties of the furnace will be somewhat reduced, and the gas temperature in the chimney will sometimes be relatively high. In this case, the temperature resistance of the resin is crucial.

2. The choice of structural resin

As a professional High Quality FRP Chimney Manufacturer, we would like to tell you that usually for the sake of cost, the grade of the structural resin will be lower than that of the lining resin, but in the foreign countries, the same type of resin is generally used for the overall winding, because the choice of structural resin plays an important role in the service life of the chimney. The general-purpose resin used in the domestic structural resin is not recommended to be used at 60 ° C or higher, 60-80 ° C. It is recommended to use a high-temperature stable and stable meta-benzene resin or bisphenol A resin, which is more than 80 ° C. At the temperature, it is recommended to use a vinyl base ester resin.

Glass fiber reinforced materials should be E-type or E-CR type glass fiber, and the pre-coated compound must match the resin selected. In addition to the glass surface felt on the surface of the inner liner, all other alkali-free yarns and alkali-free felts should be used.

According to the order of FRP from the inside to the outside, it is usually divided into an inner lining anti-corrosion layer, a structural layer and an outer protective layer. The inner lining anti-corrosion layer mainly functions as corrosion and leakage prevention, and the structure of the entire chimney should be The most critical part, the quality of the inner liner directly determines the use of the FRP chimney. Generally, in the production of anti-corrosion layer, the importance of reinforcement material selection should be fully considered. In general, glass fiber is an economical and high-performance option, but in the case of fluorine, alkali, etc., it is not suitable for glass. Fiber, carbon fiber or some organic fiber is a better choice. In particular, the resin content of the inner liner is to be ensured.

The structural layer is mostly formed by ring-wound roving and unidirectional cloth, and ECR yarn is used in several typical chimney projects. The outer protective layer is usually a resin-rich layer, that is, a method of adding a UV absorber to the resin, and a flame retardant may be added according to the flame retardant requirement to achieve the purpose of flame retardant.

The production process of the High Quality FRP Chimney abandons the traditional spiral winding, but uses a unidirectional cloth to provide axial strength.

Next: How To Design A FRP Chimney For A Variety Of Equipment?